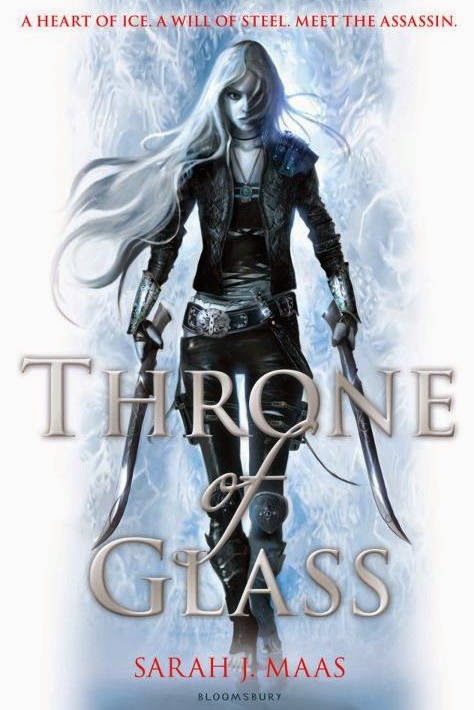 In the dark, filthy salt mines of Endovier, an eighteen-year-old girl is serving a life sentence. She is a trained assassin, the best of her kind, but she made a fatal mistake: she got caught.

Young Captain Westfall offers her a deal: her freedom in return for one huge sacrifice. Celaena must represent the prince in a to-the-death tournament—fighting the most gifted thieves and assassins in the land. Live or die, Celaena will be free. Win or lose, she is about to discover her true destiny. But will her assassin’s heart be melted?

Review...
This is going to be one of those reviews, where I say that I really liked a book. And then proceed to tell you the many things I didnt like.

Throne of Glass was a really enjoyable read. The writing style was fun, and kept me interested the whole way through. You also get to see the story through not only Celaena's eyes, but also Captain Westfall and Prince Dorian. It was great to be able to see what they were doing away from each other, especially as they were major parts of the story.

Another thing I really liked about the story was Celaena. She is this bad ass assassin, who can kill you and look amazing doing it. She embraces her looks and femininity, using them to her advantage. Also she was such a strong willed and stubborn character, even in precarious situations. And she loved to read. Need I say more.

Unnecessary love triangle: Oh love triangles, how you plague me. The one that appeared in this story was expected, and turned out to be unoriginal and kind of dull. Mainly because it caused me no uncertainty. I knew who she would chose eventually. I wasn't worried, I wasn't rooting for the underdog. Because I knew it would be useless. (And I was right) Why couldn't they just be friends? Oh I know, because its YA.

Implied Violence instead of actual violence: Basically I wanted more violence. Maas continually describes violent or action scenes after they have finished. The challenges were often skimmed over, in favor of the aforesaid useless love triangle. Also Celaena doesn't really get enough chances to show us her assassin side. Its something we always know about, but don't experience enough.

Slightly implausible: There were some situations, like the Prince being left alone with an assassin. That just didnt seem like they would actually happen. Also the whole challenge scenario also seems a bit dubious. Would a king actually allow an assassin or criminal to work closly with him, and have a high position in the kingdom. Then after a few years let them go free. I dont know about that.

So like I said at the beginning, I had my misgivings about this book. But I still enjoyed it, and I will definitely continue to read about Celaena the assassin.