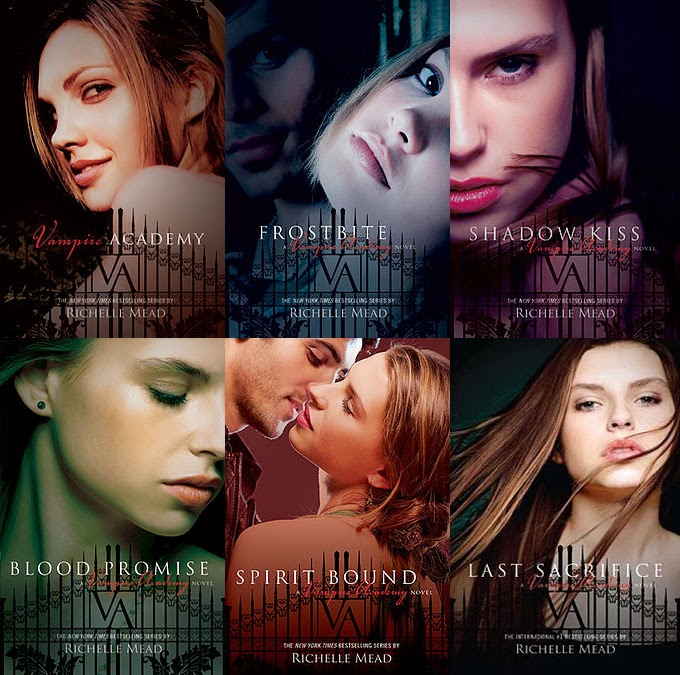 (them ugly covers are overflowing)

Goodreads Synopsis of the first book...
St. Vladimir’s Academy isn’t just any boarding school—it’s a hidden place where vampires are educated in the ways of magic and half-human teens train to protect them. Rose Hathaway is a Dhampir, a bodyguard for her best friend Lissa, a Moroi Vampire Princess. They’ve been on the run, but now they’re being dragged back to St. Vladimir’s—the very place where they’re most in danger...

Rose and Lissa become enmeshed in forbidden romance, the Academy’s ruthless social scene, and unspeakable nighttime rituals. But they must be careful lest the Strigoi—the world’s fiercest and most dangerous vampires—make Lissa one of them forever.

Things I liked about the series...
-The characters were probably my favourite thing in this series. Rose is such a different protagonist, she's strong and bad-ass, but also so strong willed and reckless. And I actually liked this about her, it added so much to her as a character that her faults were also her strengths. I also loved Christian, mainly because he is so similar to Rose, and he oozes sarcasm. Which is the only thing someone should be happy to be oozing.
-The setting, the dynamic of the school and vampires were really interesting to me as well. I enjoyed all the school drama to be honest, and also the fact that Lissa is a royal vampire. And getting to see what that means, and how it effects her.
-The books were all basically addictive. They were so much fun to read, and I couldn't stop.

Things I didn't like about the series...
-The constant re-capping that went on throughout the series. Every so often the author would re-explain something that had happened in a previous book. And she would do it in the most obvious and tedious way possible.
-One of the romances in the books really started to annoy me. I actually started out the books really loving and routing for these two characters to be together. But by the last two books, it had gone on long enough. I was just tired of this constantly being a thing, and I really really wanted it to stop.
-Rose and her lack of character development especially in the last two books also irritated me. At the start of the books she jumps into situations without thinking. Which is brave and endearing at first, but eventually I wanted her to use her brain a little more. Nope, apparently this was not meant to be. Yes she did grow, but it wasn't enough for me.

That is my review of the Vampire Academy series. I did really enjoy it, despite the negative things mentioned. And I will probably be reading the Bloodlines series spinoff, sometime in the future.
Posted by Unknown at 12:00