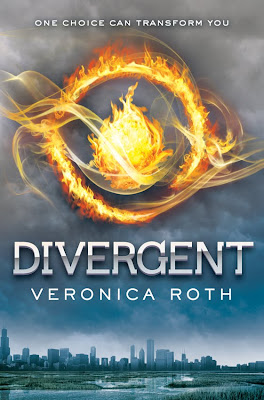 Goodreads Synopsis...
In Beatrice Prior's dystopian Chicago, society is divided into five factions, each dedicated to the cultivation of a particular virtue--Candor (the honest), Abnegation (the selfless), Dauntless (the brave), Amity (the peaceful), and Erudite (the intelligent). On an appointed day of every year, all sixteen-year-olds must select the faction to which they will devote the rest of their lives. For Beatrice, the decision is between staying with her family and being who she really is--she can't have both. So she makes a choice that surprises everyone, including herself.

During the highly competitive initiation that follows, Beatrice renames herself Tris and struggles to determine who her friends really are--and where, exactly, a romance with a sometimes fascinating, sometimes infuriating boy fits into the life she's chosen. But Tris also has a secret, one she's kept hidden from everyone because she's been warned it can mean death. And as she discovers a growing conflict that threatens to unravel her seemingly perfect society, she also learns that her secret might help her save those she loves . . . or it might destroy her.

My Review...
Divergent is one of the most action packed, and fast paced books, Ive read in a long time. Things happen so quickly, you wont even have time to get to the edge of your seat.

The characters are described very well, and let you easily imagine what they would look like. The setting is very dystopian, and very dangerous. It adds to the pace, and makes strolls in the book, a little bit nerve racking. There are some world building holes, but theres 2 more books in the trilogy to fix that.

Some other problems I had with the book, was that it was really hard to like the main character sometimes. The writer made her into a very distinct and unusual person. And so it took some time to get to like her. However, this distinctness was sometimes lost, and the main character took on the usual, dystopian tough girl persona.

There were also some characters who were only skimmed over, and who we didnt get to see in depth, but have no fear, more books are near!

This was just such a fun and engaging book, it was so easy to read. And it was SO fast paced! I definitely recommend it to you.

If you have read this book and want to discuss it with me, then watch the video below and head to my YouTube page: bookswithdylan