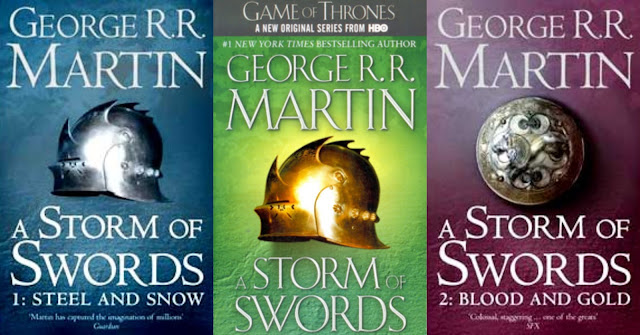 For people who haven't started this series...
First of all, START IT! It is a truly amazing story, that will absorb you into another world. Filled with fighting, action, a lot of betrayal and scheming. As well as some twists that will leave you absolutely stunned.

Secondly here are 5 things you should know before you start the 'A Song of Ice and Fire' series:
1. These are the most realistic characters you will probably ever encounter. They jump off the page, make you fall in love with them, or hate them...or both. And then they die! Just kidding, but not really. No one is safe in these books. You think that a character is vital to the plot line, so they wont be killed off? Think again!
2. Its set in a world full of castles, queens, lords, and knights. And is full of adventures, that take some of the characters all over the land. Facing many, many dangers, that make for an exciting, suspenseful read.
3. Its narrated by lots of different characters(A storm of swords is narrated by 10 main characters), so you get to see everything that's going on.
4. There's an HBO tv show, that is just as awesome as the books, if that's possible.
5. Be prepared for these to be your favourite books ever!

If you want a full review of the first book, click here

For people who have read up to A Storm of Swords...
The third installment was by far my favourite book in the series so far. Especially the last half, or part two. There were so many twists, and shout-out-loud moments. The character development was really well done, some characters I didn't care much for or even disliked. Became some of my favourites to read, and to root for.

This book was also the most intense, with many main characters heading in the same direction. I will leave it for you to find out if there are actual reunions. Also it finally feels like we are moving forward. Some plot lines were resolved in this book, and it feels like the main characters have somewhat of a new purpose. I cant wait to read the next book in this series, especially considering the end of this one...OMG! The ending! The whole damn, amazing book!

A Storm of Swords Discussion: A Spoiler talk, for those of you who have already read this book, and want to here my thoughts.

Email ThisBlogThis!Share to TwitterShare to FacebookShare to Pinterest
Labels: a, a song of ice and fire, a storm of swords, book, book review, books, bookswithdylan, BWIF, Dylan, george R. R. martin, of, review, storm, swords, with